CARNACKI - The Watcher at the Gate

CARNACKI operates in shadowy occult realms, on the fringes, in places out of sight and out of mind of normal everday people. But sometimes the darkness touches the lives of these ordinary folks, and they find they need help - the kind of help that only Carnacki can provide.

In MR. CHURCHILL'S DILEMMA and THE WATCHER AT THE GATE, Carnacki is called on to help a young Winston Churchill in defeating a menace from the east that threatens hostilities in the years before WW1, and in overseeing an experiment that threatens to expose the whole of South East England to an entity from the Outer Darkness .

In CAPTAIN GAULT'S NEMESIS, THE BLUE EGG and THE GRAY BOATS, Carnacki aids another Hodgson character, the aforesaid Captain, in ridding his vessel of an ancient cursed box, in the procurement of a great Arabian gem, and in the salvage of a nautical government experiment gone disasterously wrong.

Hodgson's concept of the Outer Darkness is inimical and uncaring of the ways of man, and several of these new stories expand on that idea and cross into a territory that could also be considered Lovecraftian, where eldritch beings fight and strain at the boundaries of our existence and only Carnacki can stand against them.

In these new stories Carnacki helps old friends and new acquaintances in the never ending battle to keep the Great Beyond at bay.

Reviews
I really enjoyed this collection of short stories, and you can tell that Mr Meikle enjoyed writing them as well, as they shine with a confidence and assurance rarely seen when a writer adopts another’s source material and characters. I’m looking forward to reading and reviewing the other two Carnacki anthologies from the author. - THE SCI-FI AND FANTASY REVIEWER

Meikle emulates the voice, tone and structure of those original Carnacki stories almost perfectly, all the while taking them in directions that the original tales never went. - Innsmouth Free Press

The results are intriguing, compelling, and authentic-sounding stories told as if from a century ago. The essence of an effective time machine. - Collings Notes

The inclusion of horrific entities tormenting humanity and threatening to either kill us or drive us insane is a nice touch, and fit in well with the overall feel of the Carnacki stories. This is a great read that will appeal to readers young and old. Recommended. - The Horror Librarian 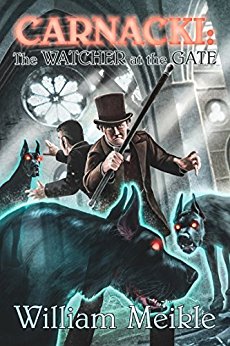